Home > About us > The Catholic School Difference 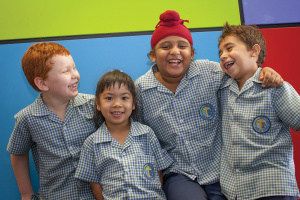 In the last few decades, the numbers in religious orders have sharply declined. They once made up the whole teaching staff in Catholic schools. Today lay people mostly staff all Catholic schools. Students are educated for excellence, according to the talents and capabilities of the individual, by properly qualified and dedicated teachers.

They see Catholic schools are founded on Gospel values, are being well run, are nurturing and strongly orientated towards family and community spirit. They seek the sense of inclusiveness that welcomes parents, students and staff to be part of a joint effort to give students the best education possible. Today, Catholic Schools are welcoming to all families who fully support the Catholic traditions and ethos of the school.

There are three educational sectors operating in Australia: Catholic schools, Independent schools and Government schools. The Catholic school system is ‘different’ and is an integral part of the Church. Catholic schools are faith communities based on belief in God and a Christian way of life. Through Catholic education, families are supported in their efforts to educate young people. All education programs, religious and academic, are developed with the multicultural nature of our population and our cohorts of special needs students taken into consideration.

Catholic schools use Jesus as a role model. The Gospel teaches that Catholic schools should also be places that welcome the poorest and the most disadvantaged members of the community. Jesus cared for the poor, campaigned against injustice and forgave his enemies. Our faith dimension is a wonderful instructional teaching base that fosters a caring culture. It is important that students graduate with both a sense of their own worth as individuals but also a commitment to how they might serve their community. Our world needs good strong people with a strong commitment to social justice and Catholic schools strive to play a part in that.

Although Catholic schools charge fees, they still cater for the poor. Catholic schools are sensitive to families who may be struggling financially and fee concessions are provided for genuine cases.

Catholic primary and high schools in the Cairns Diocese are far more affordable than many may think, especially in comparison to the cost of some independent schools and kindergarten and childcare costs.

Prior to the 1970’s Catholic schools received little or no funding from government and catered for the poorest families in society, funded mainly by donations and good will of their own local Parish community. These days, Catholic schools receive around 80 to 85 per cent of the funding that is given to State School s. School fees assist in making up for the additional learning resourcing for students, administration costs, as well as in helping to subsidise the building and the ongoing maintenance of school facilities. Catholic schools educate 20% of the students in Australia and without government funding simply would not exist. The Catholic contribution to education in Australia is quite substantial and has been recognised by governments.

The significant proportion of funding that Catholic schools receive from government means that they are not only accountable to their communities, but also as accountable to government. They are bound by legislation to comply and report to both the State and Federal Government on targeted funds received. This applies not only to funding, but to everything from Curriculum to Child Protection.

Catholic schools deliver the Australian Curriculum as do all other schools, with the added Learning Area of Religious Education which is also integrated into the life and fabric of the schools.

The current procedures and practices for Church personnel to protect the vulnerable, including school children, are vastly different and improved from those of the past. Catholic schools in the Diocese of Cairns are fully compliant with Queensland Child Protection Legislation and the safety and care of children are their highest priority.

However, there is more to a quality education than academic results. Catholic schools strive to be more through their Catholic mission. Catholic schools also focus on a holistic education of the whole child – socially, emotionally, spiritually, physically and culturally. All important is preparation for life, and a life of worth at that – not merely a life of work.

Catholic schools place a strong emphasis on the social and emotional well-being of students, teaching fundamental skills necessary for wellbeing and life effectiveness. These skills improve the quality of learning and life of young people and the communities in which they learn and grow.

The systematic promotion and facilitation of positive relationships at school has been identified by many researchers as a core component for improving student wellbeing, enhancing school culture, preventing school violence and bullying, successfully engaging students’ intrinsic motivation to learn and improving student academic outcomes. Social Emotional Learning provides the foundation for academic achievement, maintenance of good mental and physical health, quality relationships and responsible participation in a democratic society.

Catholic education holistically promotes the growth and development of the human person as an individual in relationship with others and within community. Social Emotional Learning is therefore inherently Catholic in philosophy, powerfully congruent with Catholic Education’s vision, mission, beliefs and values, and an integral and central part of a Catholic school.

This holistic approach focuses on the full development of the person – intellectually, spiritually, socially, emotionally and physically and provides an educational foundation for life to the full. For a significant proportion of the Australian population, this comprehensive package of holistic education offered by Catholic schools is highly valued and sought.

Also in this section